Opening day of Mrs. Delhi-NCR 2015 on 15th June where SLAP (Street Level Awareness Program working to train and empower women, to prevent child abuse and to create gender sensitization) trained charming young ladies to be judged on street survival skills for the first time in the history of a beauty pageant. 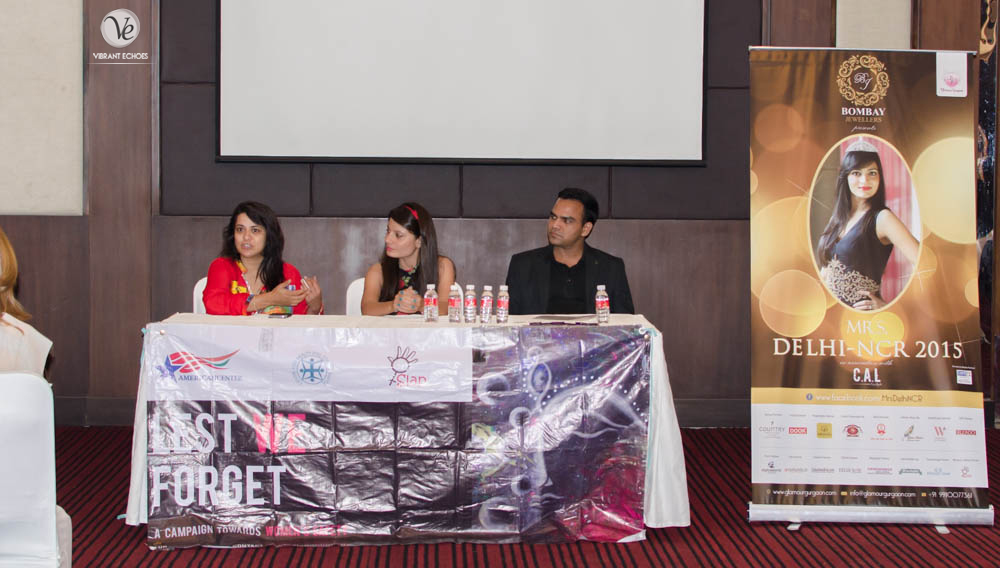 Ms. Poonam Kumar, Mriganka and Saurabh embarked on with the first day of Mrs. Delhi-NCR 2015

Fear of assault, violence, eve-teasing adheres to every woman’s heart. From the day she starts understanding her environment, she has the feeling of insecurity. She has to struggle all the time for her education, job and after marriage. She has to think before she moves out of her house. She has to be very alert while walking on road, commuting through public transport. In India, thousands of cases of sexual assault are reported by women every year but lacs of cases are not disclosed by women because of the fear what will others think about her and family. However, these cases can be reduced if each woman learns certain basic safety steps measures and actions at the time of tricky situations. 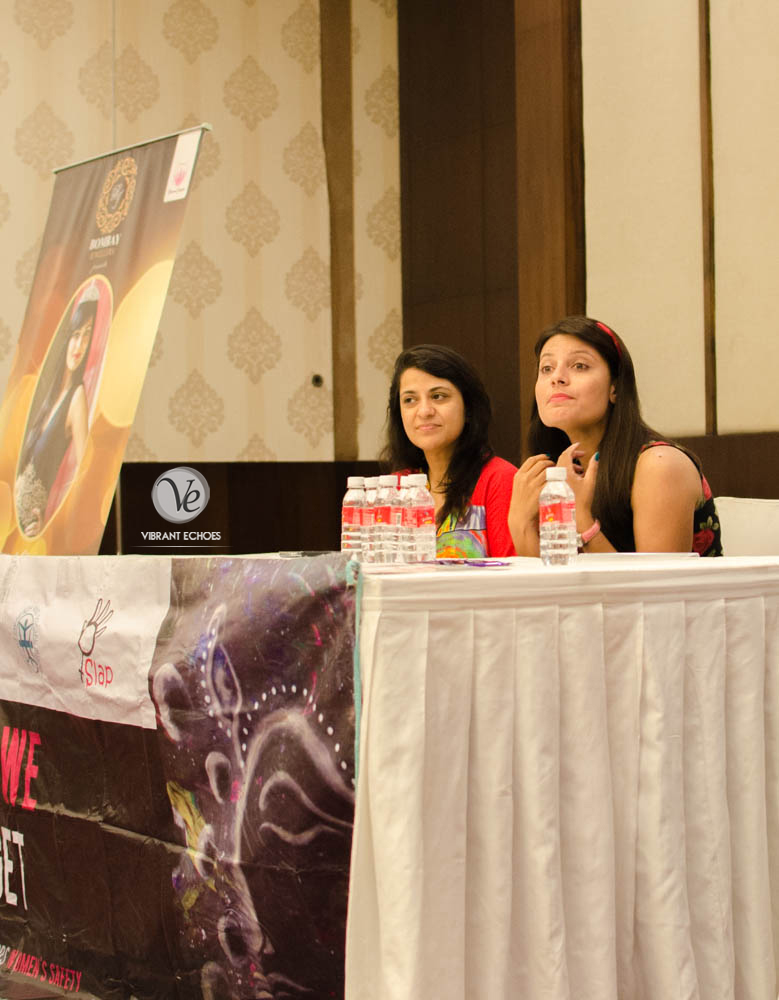 Mriganka Dadwal, Executive Director at SLAP, along with Ms. Poonam Kumar, owner at Priceless Possessions and co-organizer at Mrs. Delhi-NCR 2015

As per Ms. Poonam Kumar, the pageant is a platform to judge the elements of ‘Beauty, Brain and Brawn’ working in tandem and provide a life time experience to the married women shortlisted after grilling auditions in Delhi-NCR region. At some point of time, most of the girls/women confront those gazes and lewd remarks and assaults (in worst cases) irrespective of what they wear, how young and appealing they are and all that jazz. That’s why organizers included women safety and survival skills session into the contest to instill courage, confidence and conviction into them. 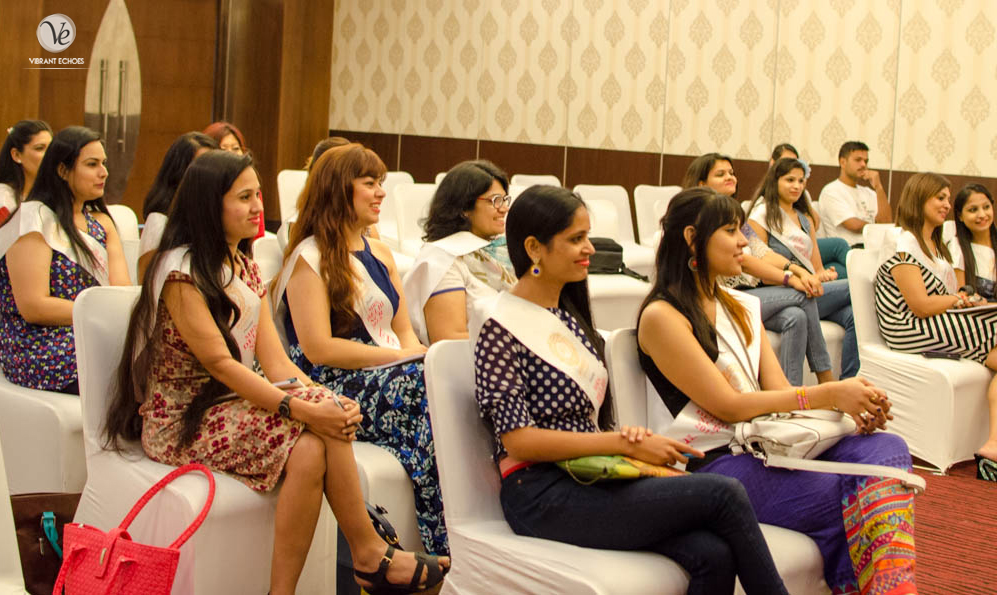 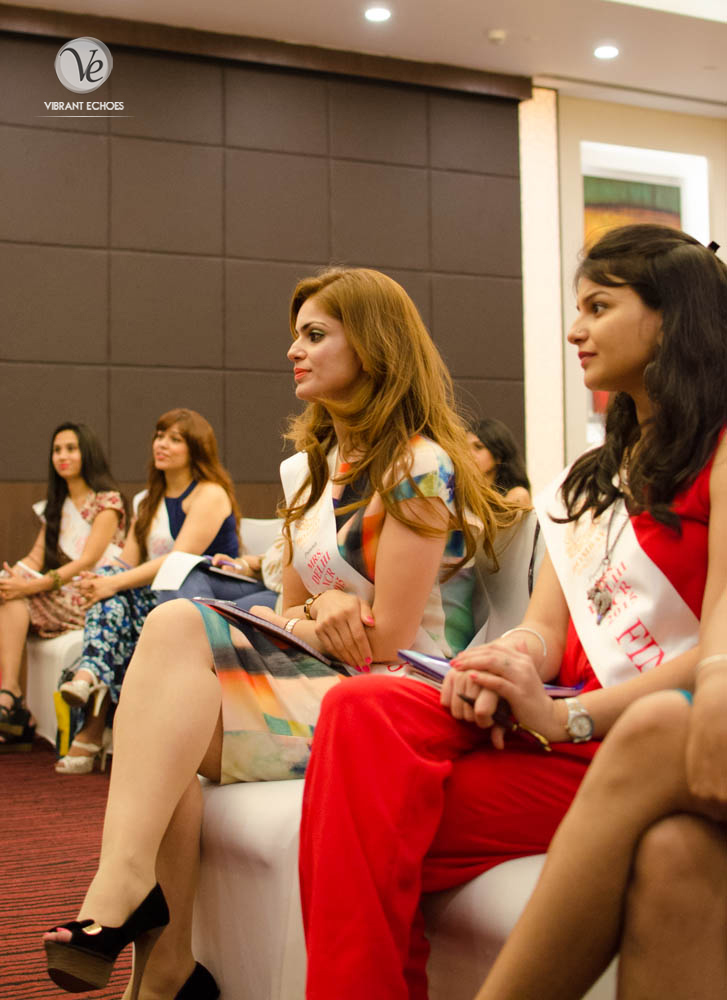 All the gorgeous ladies listening to the organizers with rapt attention sprinkled with a jovial air around.

SLAP, Women Safety Partner for the event, maintains that its existence is not just to smack a physical ‘Slap’ at the face of attackers but to hit the polluted mind-sets of a Male Chauvinist society. Mriganka Dadwal started the session with some ice breaker common incidents women face when on streets. Then contestants came out of closet and shared what they suffered and how they fought the situations. 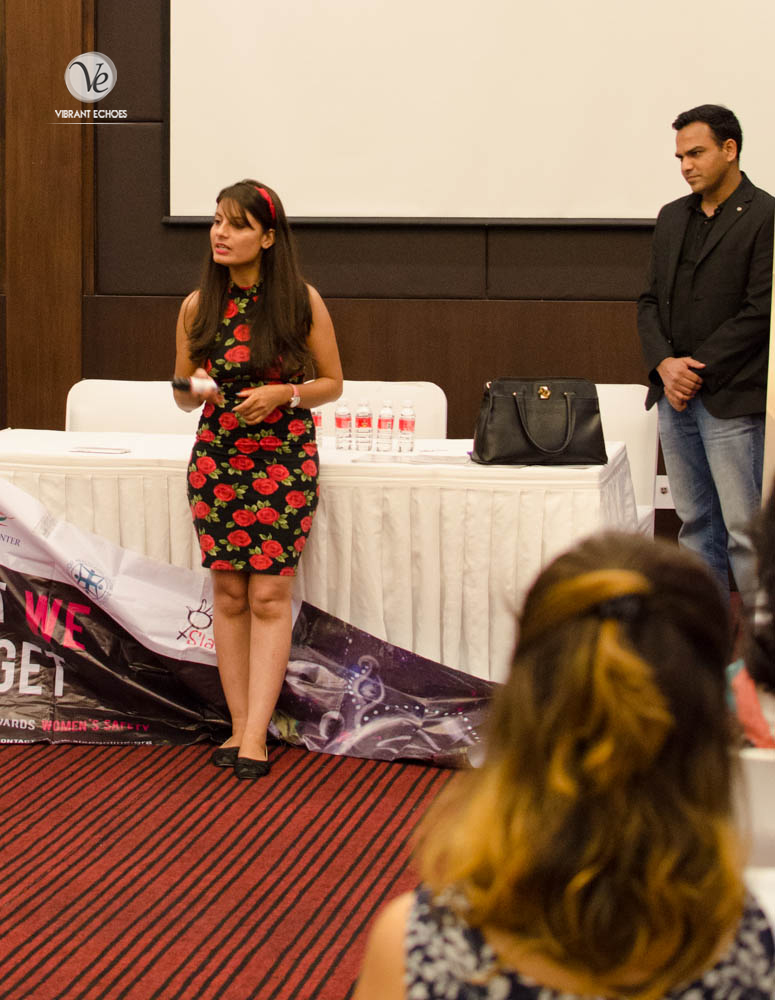 They were narrating experiences how they managed to tackle a situation and people were all ears.

Mriganka herself told once she was returning to her home late evening from a lonely lane, two men followed her. She sensed about the danger and started walking in zigzag manner, dialed a friend’s phone and started taking loudly. Those men got baffled and then she luckily managed to escape from there. One of the contestants was once going to market by rickshaw. She noticed two men on bike were following her. She quickly took out her mobile, pretended to call police and talked loudly meanwhile she boldly looked into their vulgar eyes. They felt weak and ran away. Thereafter discussion went on about the things a woman generally carries in her bag and which can act as safety weapons for her. Pen, mobile phone, nail filer, bun pins, sharp nails and heels can also play lethal to nab an attacker. Weapons all around a weapon herself, just need to use effectively, as put forth in jest by Mriganka. 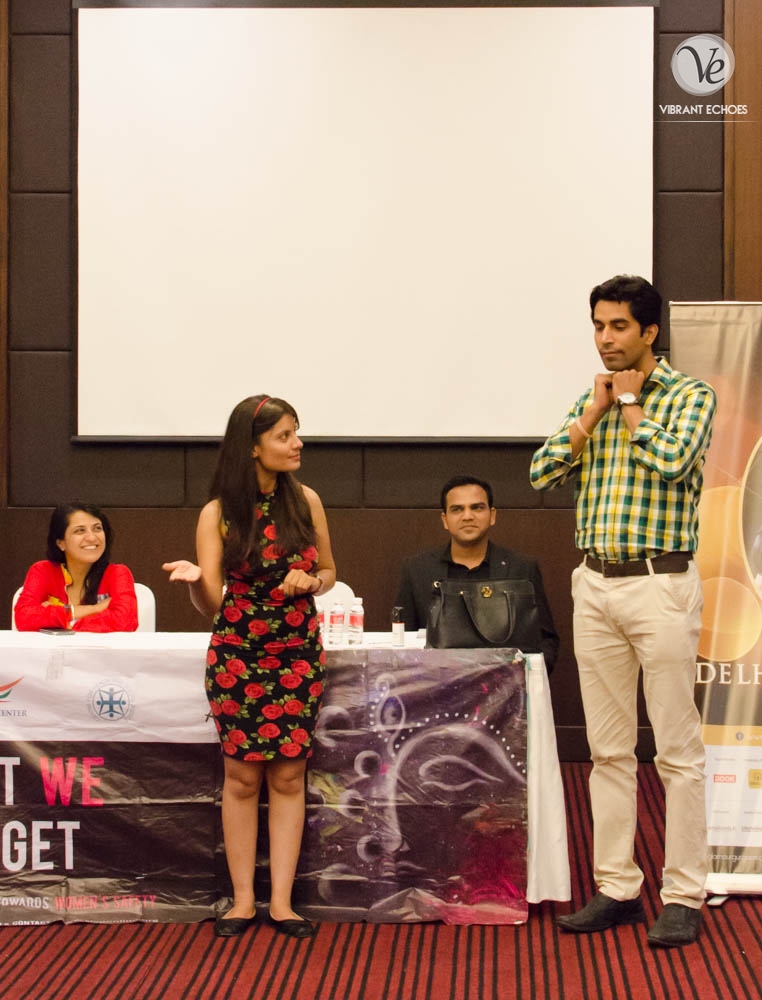 Organizers, Contestants and Media; all were engulfed in activities imparting awareness.

Speed dial numbers, Emergency helpline numbers, SOS, Safety apps in Smartphone, Pepper spray, Weak spots in human body etc were the basis of volley of questions Mriganka threw for a reality check. She made them run on heels to grab the chocolates as goodies when there was a tie. She didn’t even spare Media partners as she asked to press dimple under Adam’s apple to show how choking that can be for an attacker. Well, I could also bag a chocolate after such a coughing act.

Then came the turn of instructors, Ishita Matharu and Prashant Singh from Krav Maga, India (founded by Master Vicky Kapoor) to train the contestants employing the simple techniques of Krav Maga (Israeli Self Defense System) to keep the attackers at bay when caught in unwanted situations. They demonstrated how to block advances of an attacker and how to react accordingly in a jiffy. Ishita asked all women present over there to be a part of interactive training session. Ms. Poonam Kumar, Mriganka and Heena (from Vibrant Echoes team) also joined the contestants gleefully. Prashant was the only one as Bull’s eye for all lovely ladies, what a pity! Thanks to his sheer training, grit and respect for women which saved him with all 206 in places. 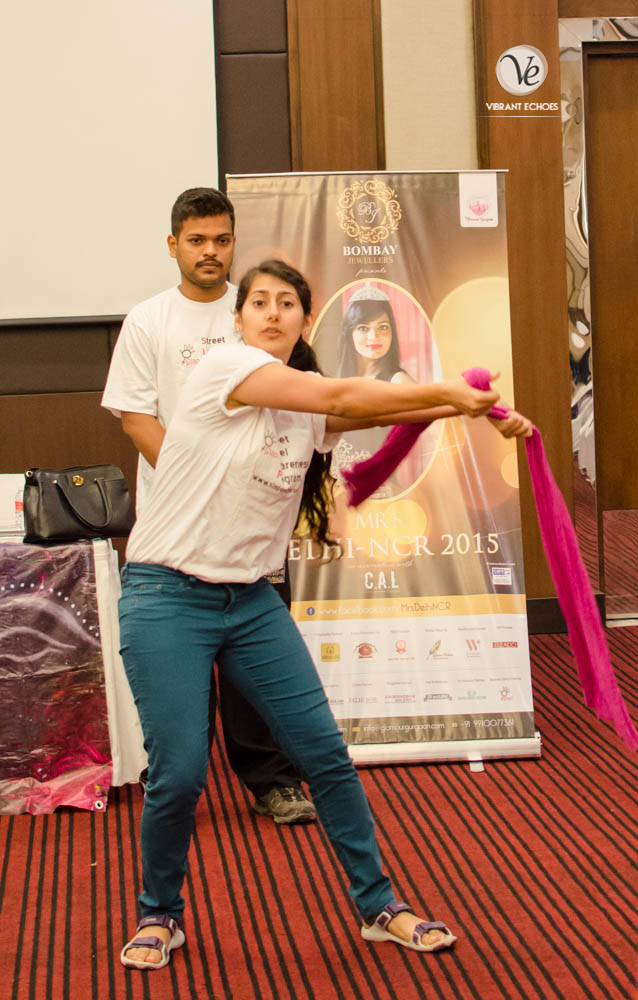 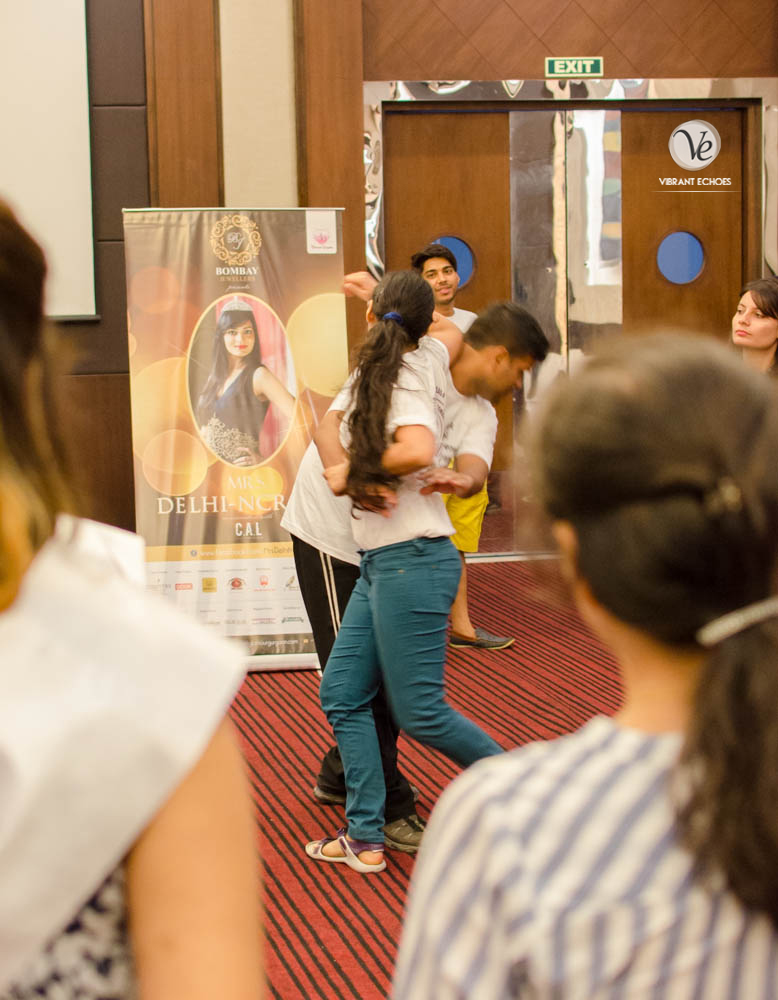 Contestants picking up the combat skills from instructors.

The first day of the event was concluded with all smiles around and SLAP’s Street Smart Woman’s Survival Guide in all hands. Accept, Acknowledge, Act!

Here are some excerpts of what we got to know from Master Vicky Kapoor, founder of Krav Maga, India.

Q: There are lot of popular martial arts prevalent, then why Krav Maga and for how long, you are into this?
A: Combat skills are reality based. In real time life threat, there are no rules of fighting. The Krav Maga form of fight is for survival. Any person irrespective of gender and age can do it. As the country’s first and the only International Krav Maga Federation (IKMF) certified chief instructor, I have over 42 years of experience in Hand-to-hand Combat Training, Military Close Quarter Combat Tactics and Specialist Law Enforcement Tactics.

Q. What is Krav Maga in Vicky Kapoor’s words in nutshell?
A: Krav Maga is a contact combat. It is real time fight where the rule is simple- You will do anything and everything to survive on street against assault in the fastest time.

Q. What made you draw close to Krav Maga combat skills as career?
A: I believe that no other art of combat tactics offers the same practical implementation under real time conditions like Krav Maga and I am determined to teach Krav Maga so that each person can take up the responsibility of their protection through its battle tested tactics and mechanism.

Q. How and when you got associated to SLAP?
A: My association with SLAP dates back to its first workshop in response to Nirbhaya incident. On 26th December 2013, we rolled out the women safety and street survival workshop in all four metro cities to help women escape the distress situations.