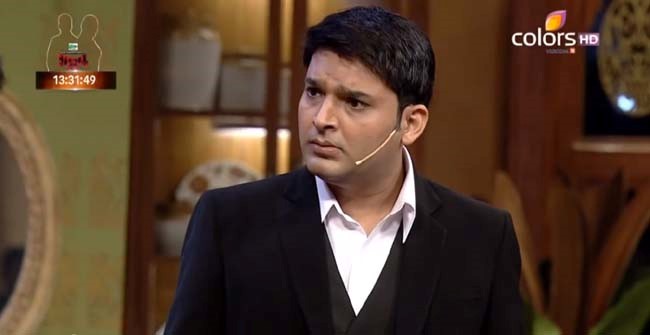 (The Japanese have smaller eyes than Indians. But when they saw you, even their eyes grew wide.)

For instance when he, in another episode, made a young man get up from the audience for his customary session of condescension, he greeted him with a ‘aur bhai gareebon ke Neil Nitin Mukesh!’

The man merely smiled at went over to his question, saving himself anymore insult at the mob-laughter of the audience and at the crass sense of humor of the former-cricketer-present-day-poet-presiding-over-at-the-show.

Kapil has, I would say, a very irresponsibly harsh sense of humour. Humour that is not harmless, but simply aimless. He is not making statements or using black humour in his acts. The same kind of language, punctuated with increasing vulgarity on the part of the presiding chairman Sidhu, and name-calling and bullying that would always please the typical post-ten-at-night North Indian, have become drab. Kapil’s writers are lazy and the laughs are now beginning to rot.

For starters, the family is a bunch of lazy dimwits, and by dimwits, I certainly don’t mean stock harmless simpletons. Fifteen minutes into the show, the servant makes his entry, with an endless, not-even-funny-anymore complaint about not being paid enough and then with a thoroughly insulting tirade about the family’s hyperbolically stingy ways. I daresay this is Kapil making sure he takes enough jokes on himself. And insults.

Insults. The retinue begins to make appearances in order. The bua, the ‘helpless spinster in her late forties’, showers entreaties at practically every male present in the entire hall. It often frustrates one to see a really entertaining actor doing the same thing week after week. Pinky tosses her dignity around and shows off what apparently is sexual-starvedness, week after week. The wife, the good-for-nothing woman who has visibly had nothing in dower, since she is from a penniless family and has a dotard, unhygienic father, appears next, mostly, dressed in a swish-looking saree, but probably not respectable enough to impress Kapil. She has pouty lips and the only credit Kapil’s dialogues deserve, lies in the variety of similes he uses for these assets of hers(ouch!). Bittu’s grandmother lacks any wit whatsoever, and has to mostly make do with forced puckers on stars’ cheeks, crude gestures and jokes that are high with gulps of country liquor. For a show that is two years old now, the one-liners, the ittus and thullus of Kapil’s characters are simply lacklustre. The Laurel/Hardy-ish pair of Gutthi and Palak can act, but their depiction is a little too offensive at times. While Gutthi is exaggerated sexism and even regionalism personified in some cases, Palak is the butt of half of Kapil’s jokes, who cracks them at the cost of her weight issues, and those of thousands of people in the country.

The show also probably owes half of its TRPs to celebrities coming over twice every week in the first year, and once, once the show outlived its expiry date (such irony).

In India, Kapil Sharma is television’s funniest man. Ever since the man appeared in a once-famous stand up comedy show on the now-scrapped Star One, his has been a tale of success. Winning this show, he came into money that was just good for a struggling college-theatre comedian. An equally raucous show on a rival TV channel followed, and Kapil, suddenly, was hot property. He played versatile characters that had more or less the same kind of jokes, said in the same accent and with the same cutting recklessness.

He isn’t the same Kapil Sharma anymore, though. From being a lower middle-class actor at probably what were local nautankies, a zealous participant at The Great Indian Laughter Challenge, where he had stock characters of his own to tickle the funny bones of the Shekhar-Sidhu duo, Kapil’s metamorphosis has been nothing short of astounding. The balding has been cut-short mid way. The little tummy has been packed off on a sabbatical. His attempts at suave dressing and weight loss have won him a prominent role in a major Bollywood production, but I seriously suspect he has won any respect. After all, cracking irresponsible jokes at the expense of those who have no choice musters audience, but hardly wins followers.

Kapil Sharma is not funny anymore. He is boring.