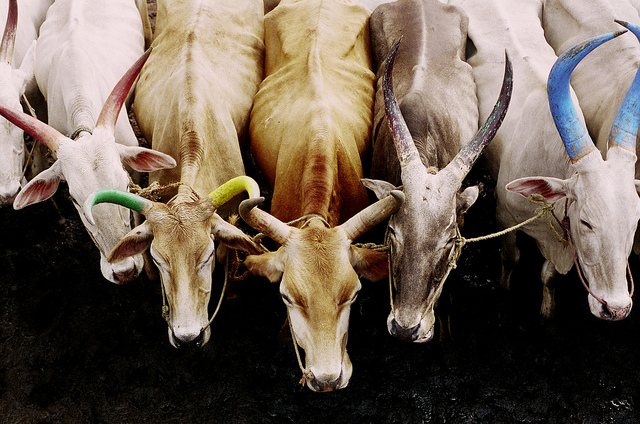 The Shiv Sena passed the Maharashtra Animal Preservation Bill in 1995, which has just been given assent by the President Pranab Mukherjee. It means that you can no longer have beef in Maharashtra. The act, however, allows the slaughter of water buffaloes, considered inferior meat. Kirit Somaiya, an MP from Mumbai, said, “This is a historic step, which has cultural as well as economic implications for the state. We had passed this Act when we were in power in 1995 and had sent it for the President’s nod in 1996. Subsequent governments in the state, however, failed to do the needful to get the Bill implemented. We had promised in our manifesto to bring this Bill and we have managed to do it.”

The law stipulates that anyone found selling or in possession of beef would be jailed for 5 years and fined Rs.10,000 (Approx. 162 USD). Not only is this act upsetting beef lovers, but is bound to leave a lot of people jobless. Mohammad Qureshi, who is the president of Beef Dealer Association, said that this bill will not only leave the people jobless but will lead to send the price of other meats, spiraling.

It is ironic that India is the second largest exporter of beef in the world. So, the BJP and Shiv Sena seem to be the only political parties who are sensitive about the preservation of this particular animal. If our government is really concerned about the preservation of cows, I guess it is only rational to put a check on beef export as well. No?

There has been an uproar on social networking sites about this Beef Ban, and people have been expressing themselves with the hashtag #beefban

while we’re on the topic of banning food… lauki really hurts my religious sentiments. #banlauki

Acche din has come for the cows, hope it’s our turn next. #BeefBan

India is now the land of ridiculous censors, moral policing and bans. Why do we blame Saudi Arabia and Afghanistan, again?