Delhi World Book Fair 2015: On its penultimate day, we were ready to roam around in the World Book Fair 2015 at Pragati Maidan, Delhi. It started with our test of English pronunciation. I tried that, followed by Samuel and Abhijeet. We got full version Britannica Encyclopedia DVD as the winning prize. So, we started on a positive and happy note. 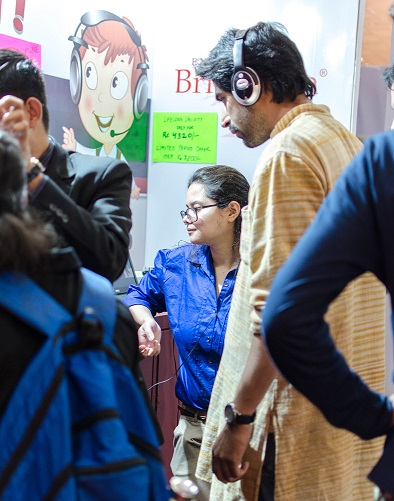 Readers, writers, students, young couples, intellectuals, photographers, media people, geeks and academicians constituted most of the percentage of the crowd. Numerous halls encompassed different sections and sections, in turn, constituted number of stalls and corners occupied by different publications, groups, individuals etc. There were discussions going on, people were given a chance to ask questions and know about the views of the guest speakers. 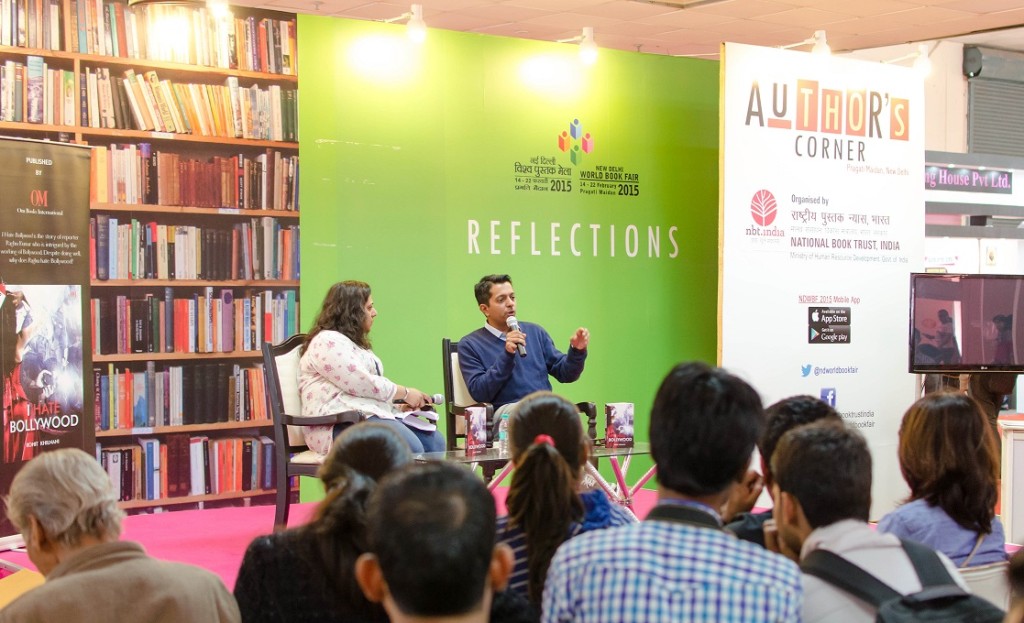 Book promotions and launches were going on in different corners. Sant Shri Rajinder Singh’s book ‘Abode of the beloved’, was launched with a great verve and management. There were some performances at the stage. People joined the audience before the dusk as they wanted to get some relief. Vartika Nanda’s ‘Raaniyaan sab jaanti hain’ were some of the centrestage attractions going on with clout and oomph at Lal Theatre Chowk. There were poets, artists, news personnel, professors etc in the audience. A person was also painting the cover photo of the book. News anchor asked some questions to Vartika Nanda who put forth the answers in a way that she seemed to be prepared and when a question was thrown from an anonymous audience, she got distracted quite visibly. May be it was all planned with airs and graces to promote the book in an artificial gathering. 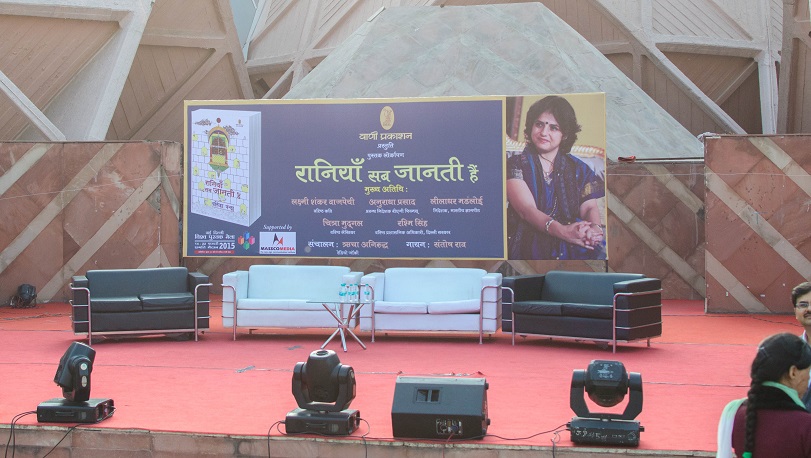 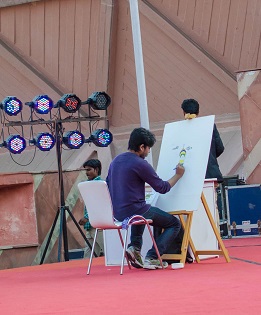 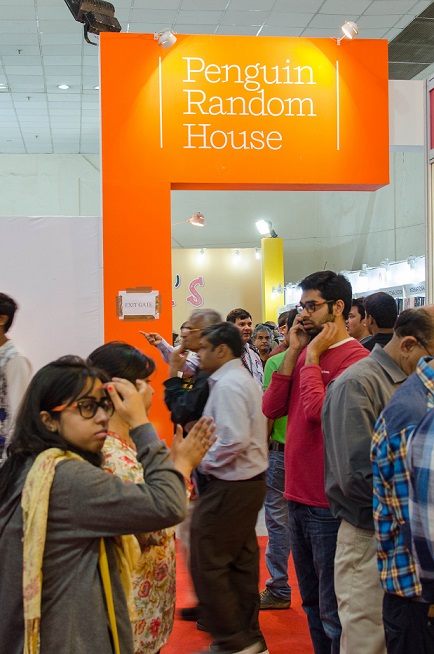 In hall number 6, we could not neglect a small stall of ‘Garbage Bin’ outside which we were welcomed with a poster gag saying, “Ye stall mera ho gaya, ukhaad lo jo ukhaadna hai” (Now this stall belongs to me, do what you can). It was the stall of the ‘Garbage Bin’ whose owner, Faisal Mohd. created the cartoon character ‘Guddu’ along with other supporting characters citing the common, day to day life, gags of childhood, city life, street life with loads of fun and innocence. It was great meeting him. 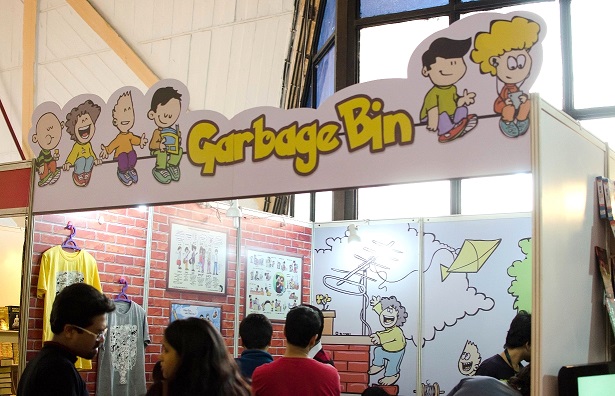 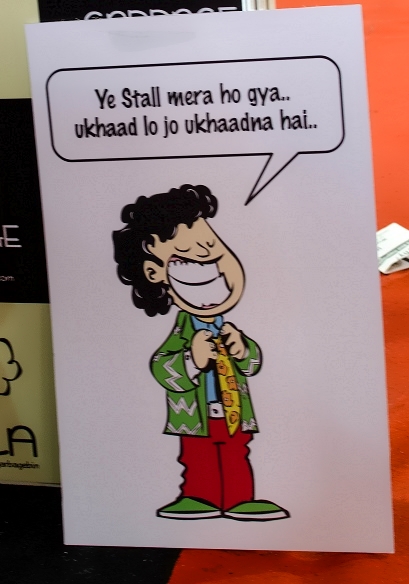 He told that he put up the stall to say that ‘Garbage Bin’ is not just a facebook page, its more than that. Faisal worked with Anupam Sinha who is creator of Raj comics characters. Faisal dialled his number too as we wanted to meet Anupam. I was a huge fan of Raj comics when I was in my teens. 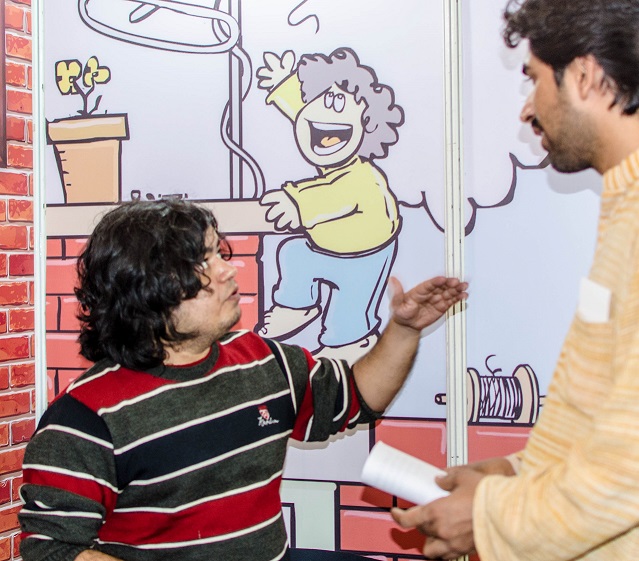 Faisal Mohd. in a discussion with Abhay Sisodia

Hall number 1 was mostly covered with kids sections and there we saw that people were so busy at all those stalls so that they can provide good books to their children. There was a huge rush in Hall 1. We saw Dera Sachchha Sauda’s “MSG’ movie promotion stall as well. We met the gentleman and discussed good points regarding the God, religion, social evils and humanity. 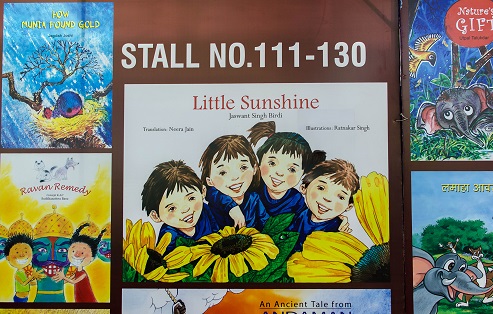 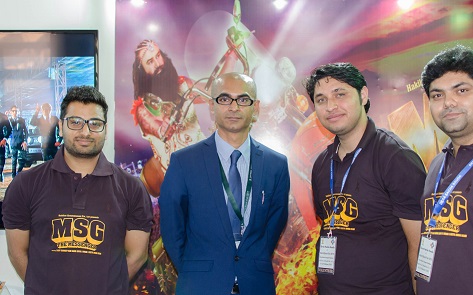 In the middle of Pragati Maidan, there is a pool with fountains. Faces get welcome misty spray carried by winds when we stand near the pool. It was a respite in the Sun. Food court was cluttered with people relishing food and snacks, those who could not get the seats inside the court, just bought the plates and drinks and occupied shady corners in the park. That was a delight to see Delhiites with no inhibition when it comes to terms of creating comfort for oneself without harming anybody.

We met different age groups of people like parents accompanying children, youngsters, elderly people, girls, boys, couples, ladies etc. Some students were from Jindal Law school who purchased some fictions. A boy of 15 told us that he compose poems, he was confident while telling. A girl in her early twenties expressed that she is an avid reader and she writes as well but she is not so ambitious that she has to get her works published somewhere, a medical student visited the fair to buy some course books which were very costly so she ended buying some novels as she had to buy something, if not the course books. 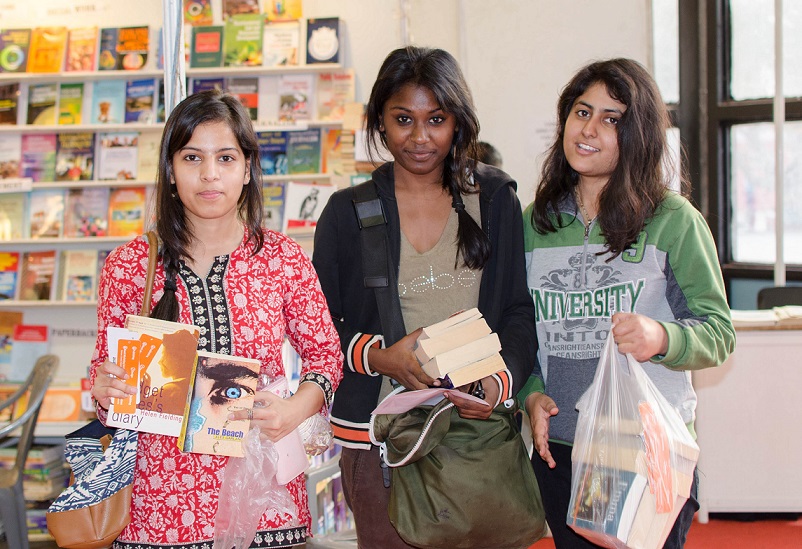 Meghna, Kavya in the middle and Mumuksha

Bhupinder, a photographer by hobby, was there with his assistant, met us with warm fraternity and shared his experience. Abhyuday, a student who loves to write reviews about events and happenings, was writing in seclusion in a hall. A gentleman walked through with us and showed the books he purchased. He asked about Vibrant Echoes and its motto and appreciated the initiative. A journalist and some psychology students also came across and exhibited their willingness to visit and write for Vibrant Echoes.

One of the most disappointing things about the event is that the authority decided to charge Rs. 150 for the guide/map. Generally this information is given along the tickets, they could have charged extra and included the information. We visited the information center to seek information about something, and we had an encounter with a lady who was least interested in providing any information. Later we realized that she was clueless herself. This is the point when Samuel got a little irritated seeing an incompetent person given such a crucial responsibility. The lack of proper information resulted in people wandering clueless, not sure what they are going to see next. We ourselves faced a hard time locating specific stalls, for e.g, the Garbage Bin.

How could we miss the fun factor when guitarists accompanied us. Abhijeet and Vipul lead us to a secluded place and it was like a roof of Pragati Maidan. That was atop ‘Falaknuma’ theatre where they jammed together some powerful yet melodious sessions. They strummed nice chords. They didn’t try to woo girls as they love their craft more than anything else that is why searched for that secluded open theatre over ‘Falaknuma’, with sky as the ceiling. 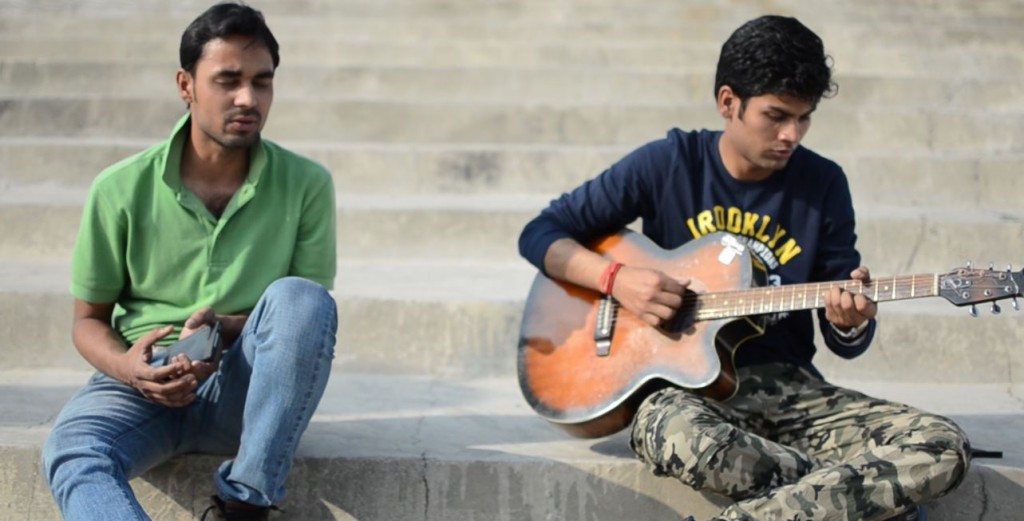