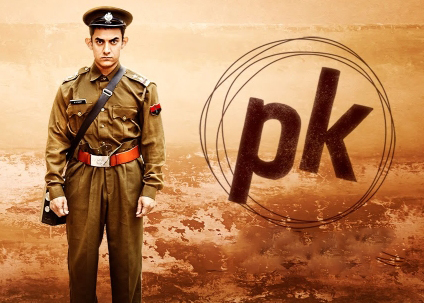 PK is a film that sets out with its clever and witty dialogue to map the face of an India who staunchly believes in her God and blindly follows what God’s representatives have to say on Earth. The film is a heartwarming account of an alien’s experiences on this earth who is robbed of his only possession the moment he setsfoot on Earth, the key to his home which the fraudulent Tapasvee ji promotes as being the bead of Lord Shiva’s rudraksh garland. Aamir Khan as PK essays the character very well.

He is the innocent and inquisitive outsider who in a bid to find his way back home ends up asking incisive questions and exposes the unsavory side of faith in a secular India. PK (drunk) is the name adopted by him. The film intersperses doses of light humor with a satirical and serious commentary on the social landscape of humans. PK slapping stickers of Krishna on his cheek and calling it self-defense’ and PK dancing with SanjayDutt is funny and entertaining but PK trying to find God by following all faiths be it Hindu, Muslim or Christian represents the frustrated common man. JagatJanani , played by Anushka Sharma is a journalist who decides to help PK and in the process, exposes the famed god-man Tapasveeji played by Saurabh Shukla. Jaggu’s love story with Sarfaraz has ended because of Tapasvee ji’s prejudices. PK in his Bhojpuri accent describes his utopic planet where no one can lie to each other and there is no need for language and no inhabitants wear clothes. It seems that PK’ a planet is a sort of utopia where everyone communicates through their mind. The first half of the film is clever and entertaining but the second half wanes in comparison.

Hirani’s film inevitably invites comparisons with the Paresh Rawal starrer OMG! Oh my God in which Lord Kishna himself descends onto the earth to help KanjiLal. OMG is satirical with dark humor that drives its message strongly back home. Kanji through his shrewd businessman mentality took the audiences on a roller coaster ride of emotions and depicted a common man’s struggle for survival while PK slowly but steadily reveals it’s message and makes use of medium of commercial cinema. PK as the outsider asks all the meaningful questions which we seem too blind to see.

OMG single mindedly focuses on the Hindu God and deals with issue with determined single mindedness while PK adopts the more comfortable mantle of a mass entertainer with its generous sprinkling of romance between Jaggu and PK and melodious songs like love is a waste of time and chaar kadam. One wonders if the film loses out on its message in a bid to appeal to the popular taste. OMG delivers a clear message that sought to answer the questions it raised. Kanji finds the answers within while PK takes us on a journey where we are led to first thoughtfully understand and then raise questions

The child like PK constantly evolves and the audience seems to evolve with him. The film tries to resolve many issues together be it the marriage of people belonging to different religion or from different nations, the daughter-father bond becoming whole again while the god-man’s true colors are revealed.

The climax seems to stretch a bit though the film entertains with its heart in the right place. Sushant Rajput and Sanjay Dutt are a delight though Anushka and Boman Irani’s characters could have been even better.

However what surprises me most about the film is not the film itself but the reception of the film. The protests headed by VHP or Vishwa Hindu Parishad call for a boycott on the film because of the Hindu elements being parodied like PK running after a man dressed as Lord Shiva. All over the world, voices have been rising in unison to accommodate a constructive culture of dissent but not ugly violence like in the case of Charlie Hebdo. These protests are symptomatic of the darker and ignorant side of ‘India Shining’. When a child is first introduced to religion and is told what PK is told, his reaction would be similar to how PK reacts. PK’s mind is a blank slate. In a bid to find answers, he exposes certain people he meets.

The film definitely does not undermine Hindutva or portrays it as a flawed religion. It tries to deal with a certain set of social problems in a limited amount of time. Many of us came across fraudulent miracle workers and we know how to distinguish between them and the truly genuine ones but the VHP or for that matter, the saffron bearers be it supposedly RSS or BJP offshoots end up portraying to us a negative attitude that ultimately resorts to violent tactics. Films are supposed to depict a slice of our lives. Despite the mindless violence, the film managed to make inroads into the audience’s lives which are quite evident from its success.