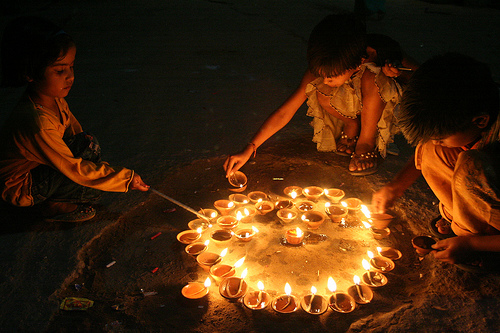 These days photo sharing and video sharing is facilitated and revolutionized by the combo of apps like Facebook, Whatsapp, Pinterest etc and smartphones at reduced cost and improved technology. A video influences thoughts more potentially than a photo and that too when the shoot is done with an idea to hit people’s empathy and sympathy corners by hitting the right notes.

A week ago, my wife showed me a video which stirred a blend of emotions then and there. A Samaritan, philanthropist, God-send messenger and messiah visited the roads and streets on feet. He met some lower economic class people like a balloon-seller, candy-seller, cobbler, toy-seller etc. He asked if every one of them believe in Almighty, all the answers were in positive. The Samaritan began his tryst with 10-15 INR 1000.00 currency notes. As they all were believers, hence the messiah handed over an INR 1000.00 note to each of them saying that God has sent him to brighten their Diwali. The soundtrack and the camera’s focus on the teary faces of recipients hit the nerve. Finally, we see a web site link, an email address and a phone number at which we can contact them to donate some percentage from our Diwali budget. Do we need an initiative initiated by somebody else? Can we do that on our own devising our own ways to celebrate festivals with our fellow countrymen?

Diwali is a festival of lights, diyas (earthen lamps), sweets, gifts and prosperity. We added crackers in the list to celebrate pompously. Over the years, fire-crackers have become the main face of the festival. Some people can’t even lighten their homes properly as they do not have those extra hundred rupees while some of us spend thousands on crackers. Some do not even know the proper meaning of Diwali as it is an everyday fight for bread and butter.

Recently in Faridabad, over 200 cracker shops were charred to ashes within a while in a fire outbroke. Those were the families waiting for Diwali so that they can make some hay and get a quota of sunshine in their lives. But this fire put water in their breads. Still, we will not be bothered enough and we will spend a lot on crackers. They put up stalls as we demand for crackers. Simple demand and supply rule of market. Thousands of years ago, Lord Ram when came back to Ayodhya after an exile of 14 years and defeating the demon king Ravan who abducted his wife, the local people celebrated his end of exile by lighting the city with numerous diyas adorning the city like a newly wedded bride sparkling with joy and shine. Crackers were not the part of celebrations then.

Crackers add the glitter, pomp and show and booms to the night sky but ain’t that an artificial addition to our celebrations? Once Diwali night is over, the Indian skies get covered with huge smog and streets look ragged with the fragments of crackers. Ain’t it putting an extra load on Mother Nature to get rid of toxicities? Streets get cleared by those very children of God who do not have those extra hundred rupees to lighten their homes properly. Can’t we replace the crackers with a 10% for those children of God including the ones who don’t even know the meaning of Diwali? Won’t it be a real cracker which will put booms, lights and joys to their lives for a few moments?

At work, one of my colleagues told me that every Diwali he sets his budget for the festival and takes 10% out of that which he use to buy sweets and candles for the needy. He said, it gives him immense pleasure that he could be a medium to serve the needy children of God. Silently he does that act of humanity as he does not need any certificate for his deeds and thoughts from anybody or any authority. He said that this way, he celebrates his Diwali not only with his family and friends but with his fellow countrymen. It’s a simple yet novel way to celebrate the festival garnished with a flavor of humanity all over. One of my other friends also came up with another idea. He painted almost a thousand diyas and decorated those with his love and compassion. Afterwards, he sold those at a lesser price than the market price. Surprisingly, he too set the 10% of the profit to offer basic requirements to the under-privileged. On his last birthday, he treated an Auto-rickshaw driver by relishing dinner with him in a good restaurant.

People have their own ways to set their 10% to share with the under-privileged children of God. 10% or 1%, does it matter to us? May be, may be not, but it does matter to the needy. If we are spending INR 5000 on celebrations, can’t we do that in INR 4500 and utilizing the 10% to share the festivities with them? This Diwali, can we share that 10% with them? Let us ask this question to ourselves and act accordingly and may be that imparts a boom, a sweet kick and sunshine to our souls.

Wish you all a very happy and prosperous Diwali!