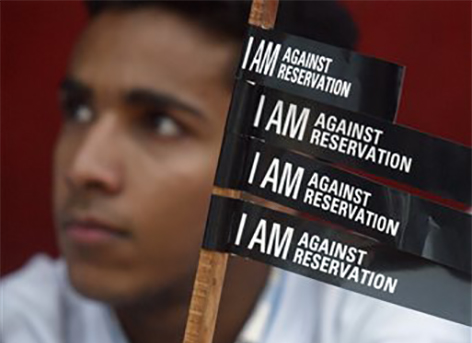 More often, we get demotivated when we do not get the opportunity to enjoy the desired post, job or education in spite of being eligible for it. The reason being that there were seats reserved which were to be occupied by others than the General category.

General Category? Are we still keeping on the norms of Harijans and the low classes? If so, who are privileged today- Brahmins, Kshatriyas or Shudras? Who are likely to enjoy the ‘Reserved’ Seats? Who are prioritised for the vacancies in Government jobs, schools and Universities?

The politics today is merely enhancing this difference via the vote banks. We clearly cannot differentiate between the separate electorate introduced by the British Rule to divide and rule with the stake of communalism and the vote bank strategy being used today! Former led to partition of India and the latter would only segregate India internally.
During the Rig Vedic period, it was suggested by scholars that the Aryans were divided into classes instead of castes. This class divisions were needed for economic and social organisation. But these were not heriditary.

Towards the end of the Rig Vedic period, Aryans gradually migrated from Punjab to Eastern India. In this process of migration, they were in a state of ceaseless warfare with Non-Aryans due to which the traditional social and political organisation of Aryans gave away. The small tribal kingdoms of the Aryans were merged into the large kingdoms that grew in this period. So the rurals of the tribal kingdoms sank to the class of warriors and nobility. The KSHATRIYAS grew from this warrior class fighting as soldiers of the kings of big states. The mode of worship also became elaborate and complicated which were difficult to be performed personally and thus a class of people called priests who were proficient in rituals , were appointed to perform the religious sacrifices. These came to be known as BRAHMINS. The remaining bulk of Aryans gave up the use of arms and instead took agriculture , industry and trade as their occupations. They formed the VAISHYAS class. The aborigins outside the Aryan race were considered as SHUDRAS who served the three classes.

With the belief that the Varna System was a class system, Vijay Sonkar Shastri authored three volumes on three scheduled castes, namely, the Balmikis, the Khatiks and the Charmakars telling a different tale:These volumes claim that there was no untouchability in the Vedic Ages and it was a later day practice that came in existence with the Mughal invaders. Further, while the Khatiks were originally Brahmins, the Balmikis and the Charmakars were Khatriyas. Since these were the warrior communities which refused to convert to Islam, they were assigned menial jobs such as scavenging, dealing with leather and sweeping. Some of them were prisoners of war who were forced to do manual work and forcefully segregated from the rest of the society, and thereby introduced to the hitherto unknown practice of untouchability.

If this was the case, these ‘Hindus’ ought to be embraced with a much higher position than Brahmins for they prevented the extinction of Hinduism. Secondly, it is noticeable that they were forcefully made poor and excluded from the society. People due to Islam-chauvinism could not support them.this led to the transformation of class system to caste system.

In the chronological periods, now comes the British Rule. The scholars have argued that the caste system was deliberately reinforced , if not constructed by the British Colonial Regime. Till 1920, the British segregated Indians by caste, granting administrative jobs to the upper castes only. After 1920s , due to social unrest , the colonial administration reserved a certain percentage of government jobs for the lower castes.

Post-independence,this policy of caste-based reservation of jobs was formalised with lists of Scheduled Castes(Dalits) and Scheduled Tribes(Adivasis). The whole country was hit by poverty , still the caste difference was maintained which led to the quota to the SCs, STs and OBCs in the constituent assembly, government jobs etc. till they flourish and reach the status of general category.

But, what about the present? When poverty is not the trademark of the reserved classes as they have already thrived, why is the quota still relevant? This is only poisoning the so called fundamental right of equality! At one side, where this right sustains, on the other hand, there are seats reserved for the aforementioned plus women and Gujjars and a lot more to come.

Now, the situation is that the poor are still poor irrespective of their categories and the rich, be it of general or any other category, is bathing in bundles of currencies.

In my opinion, if there ought to be any quota, then it must be on the basis of resources and basic amenities in order to uplift the status of the poorer section ignoring the meaningless and worthless categories.