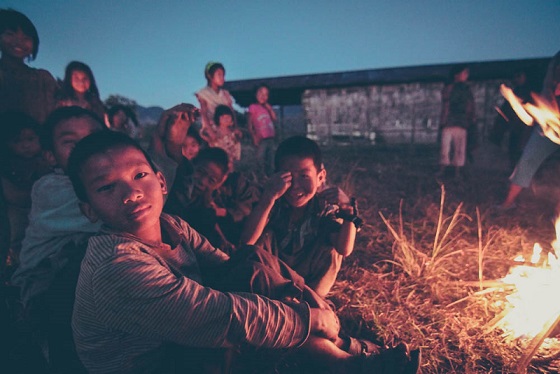 One of my friend Sweta Tiwari who is a research scholar in department of anthropology (University of Delhi), shares her views after returning from the fieldwork:

In the far flung north eastern part of India, away from the brash of metropolis, rests the village of Konyak Nagas, Longwa. The dusty and the rickety roads lead to the village Longwa in Nagaland, where the so called development in urban sense, has yet not reached.

Sharing its border with Myanmar the village is trying hard to climb the ladder of various yardsticks of progress set by the competent urban landscapes in the Nation. I had never heard of this village and neither do such bucolic sites bother the guarded cities.

Is it not obvious? Why blame us, the urban elite all the time for not knowing our countryside or the whole of geography of India? Are not we burdened enough to catch up with Mc Donnaldization. My anthropological fieldwork allowed a 16 days long stay in this village. To many it may be a distanced cultural shock, even if they are not in Nagaland. But to me, it was heaven of simplicity and modesty.

I am a vegetarian, I am an Indian but I found more Indianess in Longwa than in any other part of India. Why is nationality so misunderstood? I was a revered guest, a family to those, whom many of us call by names not appropriate. I was sister to all the natives and not a single family would let me go without having food. I have stayed six years in Delhi and I state that I don’t have Mongolian features, yet never ever did anyone show such hospitality to me.

How did words like chinki, nepali, chowmein and bahadur find places in the rationale of intelligentsia of our nation is not yet clear. But one thing was very clear to me that we are hypocrites. We talk of one nation but hardly know our national boundaries, we rattle on brotherhood but end up into bloodshed of our own brothers. Our minds are blinkered over seeing not the unity in diversity but discord in harmony.

Is it the air around us or the urbanity which has made us intolerant towards our own people? I have no answers to it. But surely I am deeply shaken by recent news of atrocity on young lad from north east. North east, the seven sisters, aren’t we proud of them, are they not the part of all our bragging of heritage and natural beauty of India? Of course they are, so how come in our daily discourse we forget about inhabitants of this seven sisters who are not Nepali, Bahadur or Momo, but humanely Indian.

Trust me the dusty and rickety roads leading to Longwa may not escort us to Turkish delight of urbanization, but their receptivity is heart tendering. The difficulties of hilly terrain and poor infrastructure, to all the bits of problem never overtook their conscience of warm hospitality. I was not called by names, but was an ‘Indian among Greater Indians’, who knew revolts of 1857 to Quit India Movement better than any of us.

The urban city light may not flicker for coming years in Longwa but in the heart and mind of the Nagaland shines the lamp of one nation, India. It is time either we bow our heads down in disgrace of dishonouring the keystone of India or get our wisdom meet with ethics of humanity.