It was a fine morning of September 29 laden with the cool breeze. One of my friend and I decided to stroll around Old Delhi. We reached Chandni Chowk at around 11 A.M. and visited Nai Sarak to buy some books. When we were done with buying some selected printed pulps, we decided to visit Parathey Wali Gali (Corridor of fried and stuffed breads), irrationally/rationally (your perspective) famous for its parathas. The streets are quite narrow and sometimes you have to wait for around 30 seconds to just move as there are many cloth shops around and they are continuously moving stuff here and there. You’d see labors carrying big boxes right through the streets and you better watch out that you don’t run into them. The streets are very busy and you are your own caretaker. 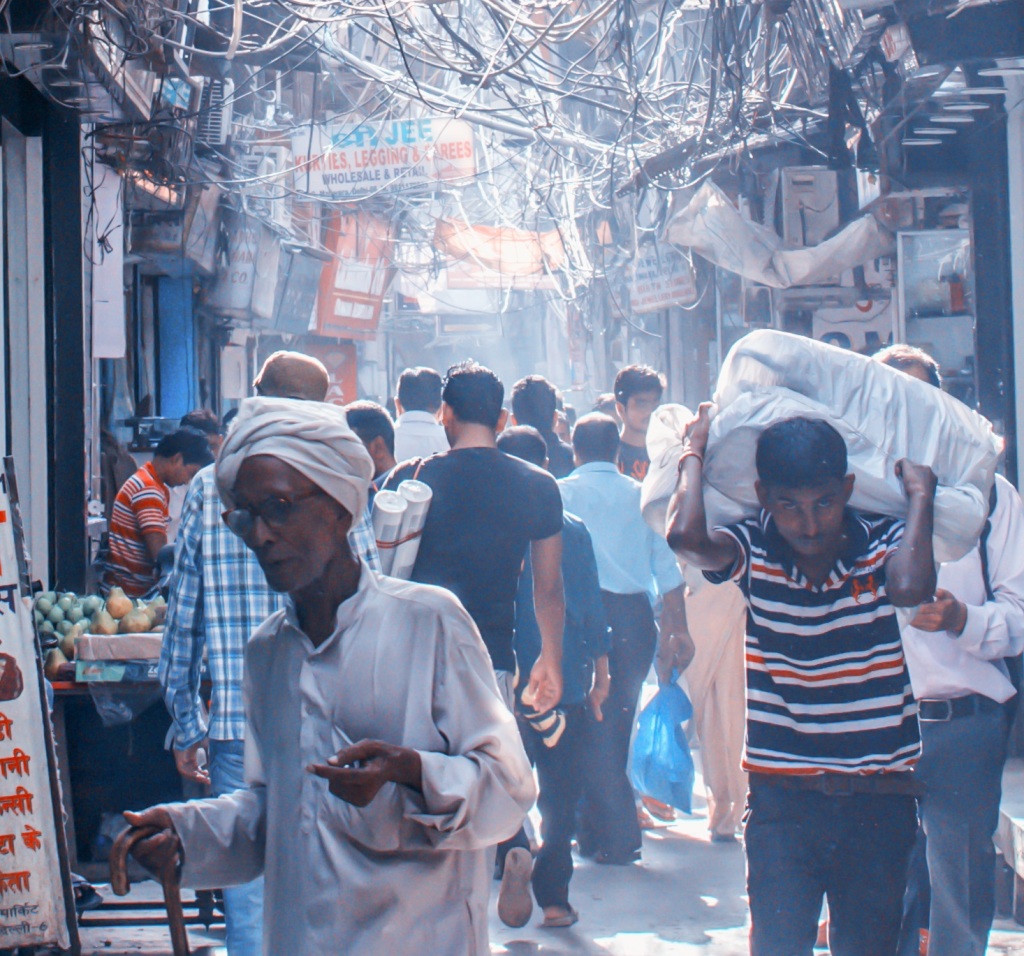 We could smell ghee when we entered the street and the shop we were looking for, was at the corner. At first glance, we were quite shocked to see how small the shop is. People were waiting outside so that they can have something as the lot which was already in, was getting done with feasting on the famous parathas. We were lucky enough that we didn’t really have to wait for long. Maybe because we looked like journalists? I don’t know. My camera was hanging around my neck. My hair and beard needed some trimming and yes I use a pair of glasses. If it was me, then yes, I was a journalist at first sight.

So yeah, this is what the place where the parathas are made look like. 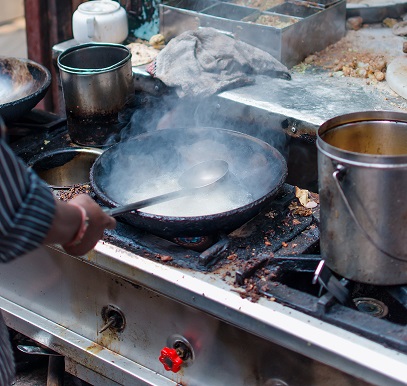 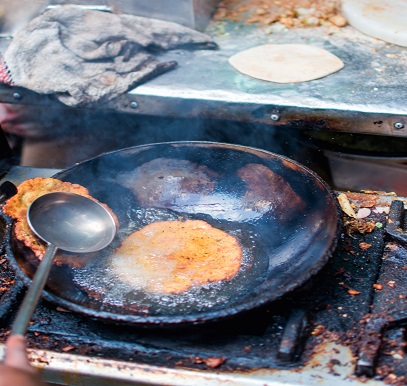 You can see that the parathas are dipped in the ghee. We ordered cheese (paneer) parathas, and as they were made right behind us we captured few pictures as well. We were a bit reluctant to eat considering the hygienic conditions. The owner indeed makes big buck, but evidently not much is spared on the ambience. I mean, it’s a famous eating point, foreigners visit it frequently and as a matter of fact a foreigner couple was sitting next to us.

When we got a seat, I kept my camera inside as I didn’t really want anything to get spilled or get smudged on the hard earned lens of it. So the next photos are from friend’s phone. He did not bother as his phone is water proof, may be oil proof as well. I am indebted for his valour and got some pictures of the place. 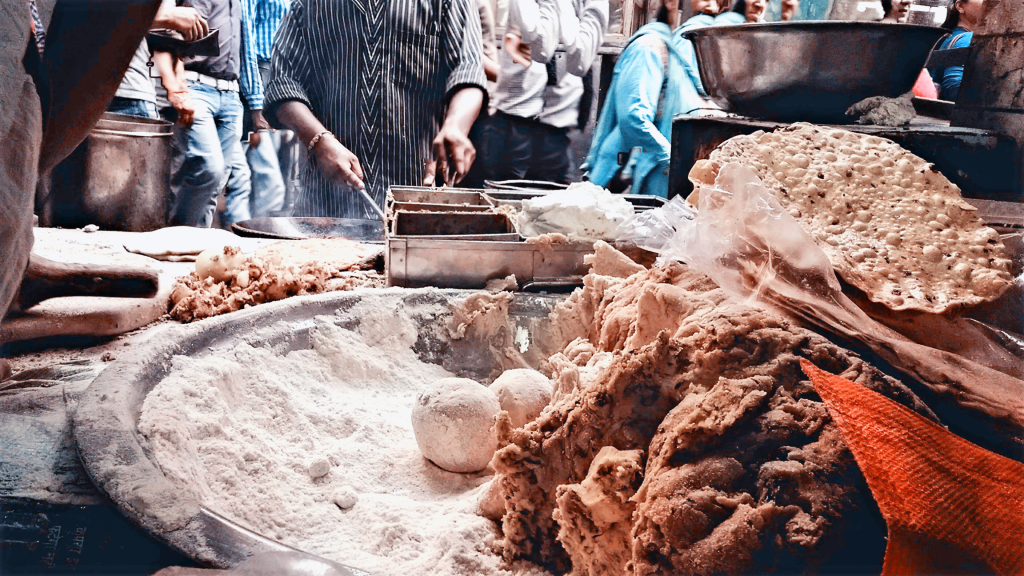 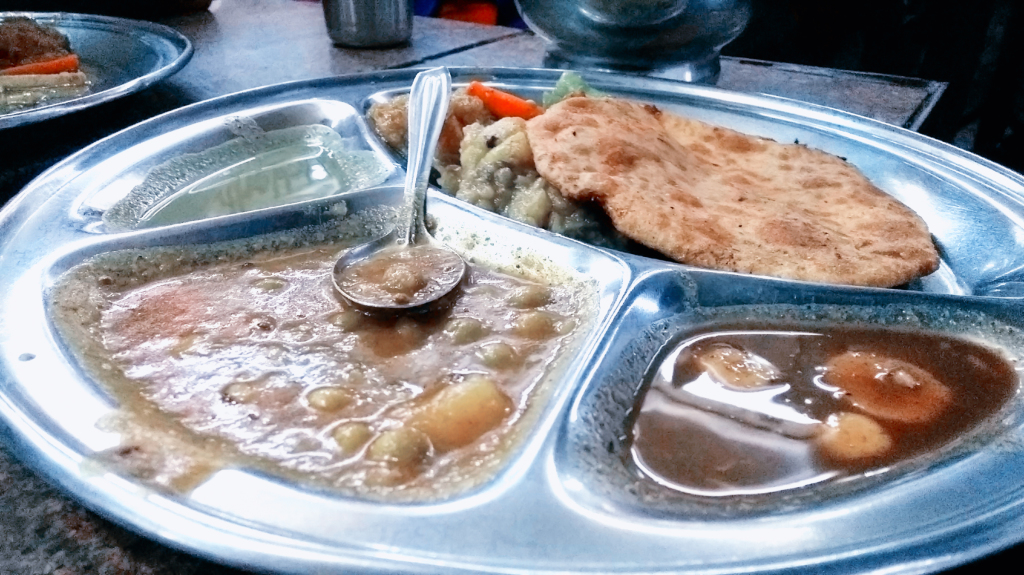 It was mandatory to order two plates of parathas, so we ordered two. May be, that indicates that you come over there in groups and that is always a plus point for them as then the discussions over the paratha table elevates the intellectual quotient of the Parathey wali gali for a while. Each costing INR 50. Our honest reaction after having them was, what’s so special about them?

My friend: “I know a shop nearby where we can relish awesome parathas.”
Me: “Parathas made at my home are better than this.”

Well, some people can fight over this opinion as they may say that I was just living the dictum, ‘Moms are the best cooks on earth for us as told by the Bollywood movies.’ But who cares, its all about personal choice and  taste buds alignment to certain indigenous food items.

I wondered why this place is so hyped? I guess I found the answer. 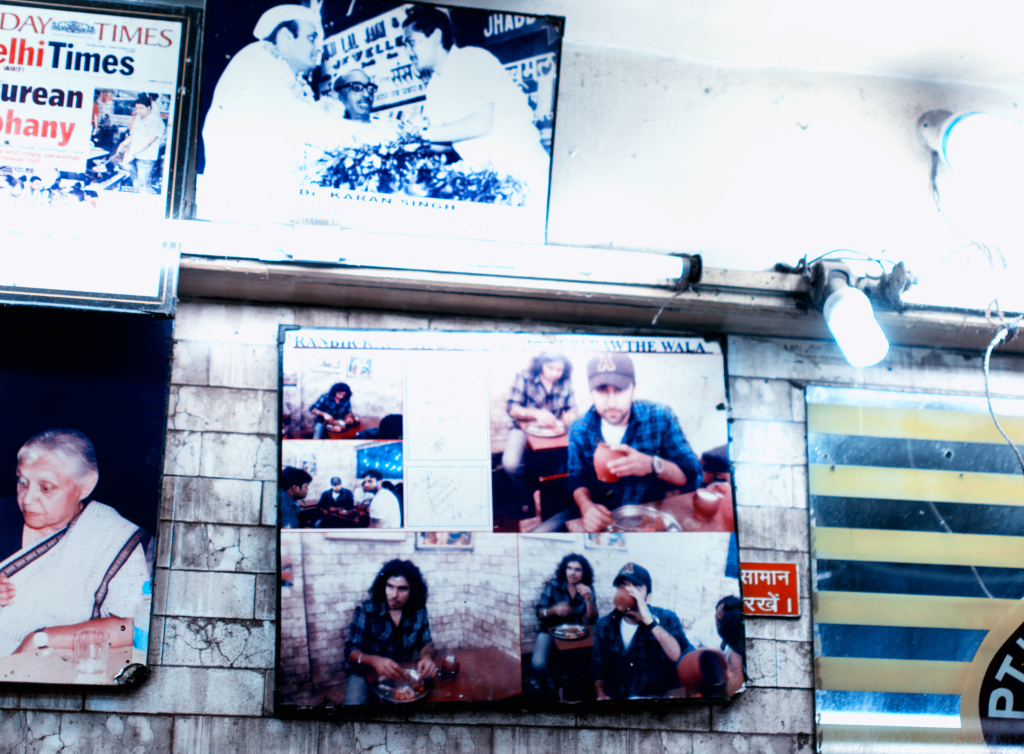 That’s Iimtiaz Ali and Ranbir Kapoor sitting right at the same shop having parathas and lassi from the shop which is at the front. Sheila Dixit was here too, but I guess Ranbir is the real deal. Keeping the sarcasm aside, it was an okay meal but, the hype got our expectations pretty high. What’s your review about the place? Do comment below.