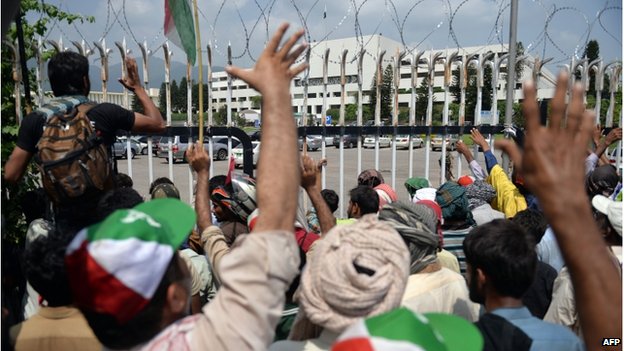 It began in 1750s when ‘Muslim Rule’ started loosing its niche. Jinnah and his fellow Muslim league members created Pakistan as a successor state to the Mughal Empire, a journey which started as a search for ‘Muslim Space’ nurtured by fear that became conviction:that a minority muslim population would not be able to protect itself or its faith from the overwhelming majority of Kafirs or infidels. Muslims who were ruling class for more than five centuries suddenly engulfed into the doubt of their mere existence amongst their fellow ‘countrymen’.

Pakistan came into existence on 14th August 1947. Out of 67 years of independence it has been under Martial law or military dictatorship for than 30 years and for rest of time they had indirect control in the country’s politics.

In the year 2014 Pakistan was ranked 146th out of 187 countries in Human Development Index. How could we even expect them to be ranked higher when lion’s share of public spending is channelised to Rawalpindi. Ayesha Jalal in ‘The Struggle for Pakistan” came up with some shocking revelations. In 1973, she says, almost 90% of the federal budget went to military ends. The condition proved no better even in 1980s when around 80% of current spending either paid off debt of funded the army.

All the three organs of the Government seems to be paralysed in Pakistan. Parliament (legislature) being supreme passive institution caves in to the army commands and to rising Islamic extremists. The biggest failure remains army-ISI, with too much power and no accountability. Executive suffers from the unsavoury politicians and judiciary comprising judges-lawyers who themselves care least about the law.

Ms. Jalal cites the example of reign of Pakistan’s recently ousted dictator Gen. Parvez Musharraf, who has been charged with treason and for suspending Constitution in 2008. The prime reason for Pakistan’s such a state of disparity remains army’s all time presence in Pakistan’s political corridors.

The army itself has no record to be proud of one. Pakistan had 3 full fledged wars with India (1947, 1965, 1971)and one regional crisis (1999). In all the situations Pakistan won nothing but world opprobrium. Ethnic cleansing, genocide and mass human rights violation in East Pakistan led to loss of that half of country, after a humiliating defeat by Indian Army in 1971. In the tug of war between army and political class, Pakistan has lost many leaders from both the ends. Starting from Iskander Mirza, First President of Pakistan, who was sent on permanent exile by the then Gen. Ayub Khan. It was army only under the leadership of Gen. Zia Ul Huq who made a martyr of Zufikar Ali Bhutto. After around 3 decades, Benazir Bhutto, his daughter and other political leaders were assassinated in 2007, possibly by army only.

Pakistani army has fought neck to neck with civilians for the throne. Be it Gen. Zia’s violent jihad policy or its tactical gains from abroad every move has boomeranged on them. Many scholars believe that army men are not driven by sense to promote national security but by an ideology. They have been instilled with the existential threat from India. In the last 6 months how events unfolded has again forced world community to ponder over the fate of a nuke armed nation. Pakistani origin Canadian TahirUl Qadri and Imran Khan with their respective army of supporters have threatened the ‘democratic institutions’. Many believe the drama is being orchestrated by army itself. Though army has tried to remain itself at bay from on going war of words but its role must be interrogated in the security lapse of ‘Red Zone’. Army is trying to act as fulcrum in the power see-saw between Parliament at one end and Imran Khan- Tahir on the other.

With the whole Parliament coming to PM Nawaz’s aid and charging duo with sedition and treason charges coupled with no active participation by army in political instability little doubt can be raised over possibility of change guard. Pakistan will remain a jelly state which will neither break away nor stabalize causing regional disparity. It has been stable in its instability.