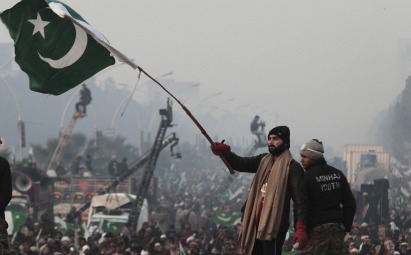 “India is a country of chaos.” “I don’t understand the politics of this nation. It’s so complicated.” We, the people of India, think that things in our country are way too complex, especially its politics. People rejoiced over the fact that after a very long period of time a stable government having the mandate of the majority will be ruling the country. However, India is a huge country with plethora of cultures and languages. This is followed by variety of interests, and thus differences in opinions are bound to happen. Expecting ‘stability’ every time in the country is asking for more. Does that mean that had India been a smaller country, there would have been more stability?

Contrast this with our ‘little brother’ Pakistan. In terms of area, it is much smaller than India. And yet the nation suffers instability ad infinitum. Some people might ask that why discuss Pakistan. It’s not our country. And we do not at all have a good equation with that nation. However, we cannot just ignore everything that is happening in our neighbouring state, which was once a part of our own country. Someone rightly said that you can choose your friends, but you can’t choose your neighbours.

“Army remains committed to playing its part in ensuring security of the state and will never fall short of meeting national inspirations,” said Raheel Shareef, the army general on August 31, 2014. After half-a-month of campaigning and series of discussions and deliberations, the Pakistan army is trying to project itself as a moderator between the two opposing forces, that is, the Pakistani Prime Minister Nawaz Sharif and the Imran Khan-Tahirul Qadri combine. The two men wanted nothing less than the PM’s resignation.

Let’s look at some facts and infer some more from them. In a country like Pakistan, where the most influential force is the army, the supporters of Imran Khan and Tahirul Qadri were able to break into the high-security ‘Red Zone’. The Red Zone is the area around the Parliament House in Inslamabad. The army passively observed all the events unfolding in front of them. The Federal Information Minister, Pervaiz Rashid said that Ahmed Shuja Pasha, the former chief of Inter Services Intelligence (ISI) (he holds an immensely influential position in the country) is advising Imran Khan. Also, allegedly, Khan and Qadri were in constant communication with the army. And later, the army acted as the mediator. The irony of the situation is that, after pondering over the above points, possibly it was the army itself who had provoked or triggered the recent crisis in Pakistan.

Christophe Jaffrelot, in an article in The Indian Express, said that once more the Pak army has shown that “it does not need to seize power to be most powerful”. If we look at the history of the country (we need not go much back in time), we can understand the above statement of Mr. Jaffrelot. It is always the army who has been in a win-win situation. By urging the army to intervene in the latest face-off, even the current PM accepted the fact that the Pak army is indispensible. So, whatsoever is the conflict about in Pakistan, the army is the victor ludorum.