“Reliving the pains and subsequent prayers at the Third Remembrance of Fukushima Nuclear Accident.” 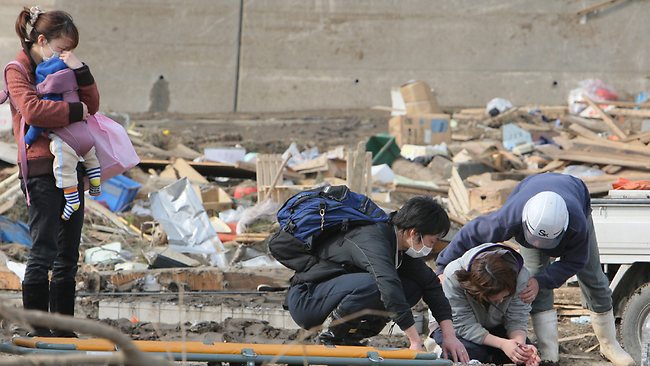 11 March 2014, a fortnight ago, tea and newspaper were in my hands. I came across a photo of some people paying homage to the deceased at the third anniversary. There was wreckage of a grounded white ship in the background of photo. Oh yes, now i remember: It was a sunny day since break of dawn till I fought with tears as I got stirred with something. Thanks to my photographic memory, all flashed in a flash.

It was a colorful morning of 17 March 2011, couple of days before the festival of colors in North India, Holi. Winters in declining phase, newspaper on table, flavored milk mug in my hand, family sitting nearby – best morning, I can thought of, and it was. After a while, mother was preparing breakfast, father was watching news and I went in for a musical shower. I love to stand under the jet along with my favorite progressive rock numbers melting into the bathroom confines. Came out with an effervescent freshness surrounding me as an aura.

It was a bliss indeed, being with the family and leading a lazy-cozy life. At that moment, the music player switched to one of my all time favorite, ‘Comfortably Numb’ whose essence was getting over me and I stepped into the living room. Five minutes later, I was uncomfortably numb after watching a news report at TV. Then and there, I felt different than what I felt till then. What it feels when a family shatters and a home is no more safe.

Salty pearls flowed through corner of her eyes. She was not more than 4 or 5. She was clutching hands of her helpless mother whom rescue workers were forcing to abandon their home, Sweet home. Japan was jolted by mighty earthquakes and titanic tsunamis. At Fukushima Nuclear facility, Reactors started leaking the invisible Wrath upon Japan, one after the other. Second World war came to an end after wrath was inflicted upon Hiroshima and Nagasaki by mankind itself, but this time it was Nature’s fury amalgamated with the man-made boons turning into banes. In the vicinity, all houses, buildings and establishments were ordered to be evacuated as radiations were eating up the life forms coming into their deadly path.

The little girl was crying incessantly and her mother was pleading not to part them from their only hope, their hard earned home. Man of the house was already succumbed to the tsunami. Meanwhile, the infant in his mother’s arm was looking at all with an innocent blank face. His sky, his father, was no more; his mother, his earth was shaking beneath. Home built by his parents was no more fit for living which once was a heaven on earth, for the family.

I was about to relish the delectable, greasy breakfast prepared by mother. But soul was winced as it was pinched and eyes were wearing tears after witnessing the disintegration of a family and a home. Observing a fast, dedicated for well being of that family, was my resolve, like a bolt out of the blue.

Pain and Prayers: former absorbed inward and latter dissolved into the Universe. Nothing is permanent in the Universe, however the truly charged prayers have the potency to fix the lasting impermanence into a temporary permanence for sake of larger good. Till late evening I had not anything except some water. I was on the verge of concluding my feelings for innocent Japanese. Then emerged words off my ink-sword as under,

Earth and Water, too much to hire
Reactors opened the gates of Fire

To the believers here, I make a call
Let’s pray for them to defy the fall

Impulsively, I’ve done this today
Asking you to observe only for a day

Prayers have the potency to ease
God bless you, God bless Japanese