“From Britain to India, as big cities are growing at rapid pace …
Are small towns dying out?”

As I came down the stairs of its central railway station and walked towards Clydebank’s crowded streets I felt something unusual. The place did not look like a part of the Great Britain. The families looked bigger and poorer. There were more pound shops than I had seen in its adjoining much bigger cities of Glasgow and Edinburgh. I could see lots of betting shops at both sides of street, a lot more than required in such a small town. There were more homeless people and apparently more drug addicts on street than expected in a usual British city. As I stood in the queue of a convenience store to get a First-Bus monthly pass, I observed almost all the other customers bought lottery tickets with or without other goods. ‘This doesn’t seem alright’, as I thought and came out with my new bus pass, my eyes caught something more unusual. In front of my eyes at some distance was a huge cantilever crane. The biggest I had seen anywhere. It was my first day at new work place located in the Clydebank Business Park, connected to Glasgow through a direct train from the Singer station. Singer? It seemed to me an unusual name for a train station in a town named Clydebank. The word ‘singer’ reminds me of only two things, the first of which is ‘a trained professional vocalist’. And the second one is the small black sewing machine kept in my home in India.

Clydebank, a town standing on the banks of river Clyde, was once home to the world’s biggest ship building company – John Brown & Company. The cantilever crane ‘Titan’, standing at around 150 feet, once lifted some of the biggest ocean liners and warships in the world. Among many, the crane which was built in 1907 at the height of British industrialisation was used to build world’s greatest ships – Queen Mary, Queen Elizabeth, and Queen Elizabeth 2. The town once echoed to the rattle of riveting hammers and the crackles of welding torches as thousands of men crafted ships, and in the recent past the rigs and platforms for Scotland’s thriving oil and gas industry. It was an important industrial town during the world wars, a place belonging to the engineers and craftsmen and their families, who were pride of Britain since the yard was first built in 1871. The German knew this and Luftwaffe bombarded the town and its shipyard on 13th and 14th March 1941, killing more than 500 inhabitants. But that blitz couldn’t demoralise the ship makers and Clydebank continued to provide great service to Britain and world’s marine and shipbuilding industry until 2001, when the yard finally closed down after two decades of struggle to find its identity in the post industrialisation modern society.

Singer station was built in 1907 to serve the Singer sewing machine factory which was established in Clydebank by American businessmen in 1885. At its peak more than 12,000 workers – engineers, craftsmen, managers were employed in the Clydebank manufacturing unit of the factory – one of the largest of its kind in the world. It was such a busy and important factory that a train station had to be built especially for its workers’ travelling purpose. The famous Singer strike of 1911, in which 11,000 workers went on strike to support their 12 female colleagues, was the first explicit confrontation between capitalists and labours in Scotland. The factory had to be closed in 1980, as the mechanical sewing machines were replaced by modern electronic sewing machines. Electronic machines required different kind of craftsmanship. Instead of risking time and money on training the existing staffs with new technology Singer Corporation moved its operations where the talent already existed. Today Clydebank Business Park stands where the sewing machine factory used to be 30 years ago. Few hundreds of people like me still commute through Singer railway station, but the locals proudly tell that the buzz created by tens of thousands of factory workers coming out of it at the height of industrialisation can never be recreated.

But surely, one underdeveloped town in one of the world’s biggest and most developed economies should be taken as a poor exception? But then I visited Workshop – once a centre of one of the Britain’s biggest steel industry is now reeling under the drug economy and unemployment rate twice the English average. Hull, Burnley, Hartlepool, Middlesbrough were once engine of world’s economy and now Betfred, Payday Lender, and Lidl are the biggest employers in these towns. And not just Britain; when I look closer back home – Modinagar, once used to feature on the atlas of most industrialised Indian towns, is now a sorry figure of its glorious past. The beautiful Laxmi Narayan Temple in front of Modi Steel Mill was the symbol of effluent working class of the town. The social hubs and staff quarters which used to be full of best engineers and management gurus from around the world now struggle to find their identity back after the big manufacturing units closed down one by one in past three decades. Today, I could meet some of the steel manufacturing experts now driving auto rickshaw from one end of the town to another.

All these towns share a similar story. During the industrial revolution in their respective countries they were important places of interest in business, political, and cultural landscapes. These small towns defined the much bigger cities around them. These were small yet strategically important centres of society. But now since the advent of post-modern world where a tiny chip can fulfil the role of a huge ship, these towns are either losing or have already lost their standing in the polity. And it’s their inhabitants, who have been part of the town since generations that are suffering due to this change. Titan still stands tall and proud; trains still stop at the Singer railway station; and prayers still echo in Laxmi Narayan temple, but these buildings are just symbols of their past and people who helped build them. A town is truly represented by its people and value they add to its culture and economy. As we are moving towards the knowledge economy which involves the use of mind more than of hands; as the drivers of economy are now big cities like London, Glasgow, Delhi, Mumbai etc., will the small towns like Clydebank and Modinagar which were hubs of manufacturing industries lose all their best minds eventually? As new generation of great minds leave their small towns for good and thus leave behind the not so gifted inhabitants on their own, how long will these towns be able to stay as important and healthy as they used to be? As our big cities are thriving and getting bigger and bigger, are our small towns dying out? 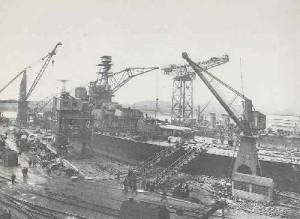 HMS Hood being built at the Clydebank yard in 1919. Titan crane is in the background (Source: Clydesite UK) 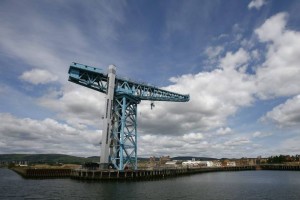 Titan today stands alone yet proud of its past (Source: Daily Mail UK)